Gold from the Earth

Turmeric (curcuma longa) is a flowering plant of the ginger family.

Turmeric roots have been used as a condiment since ancient times. Traces of turmeric, along with ginger and garlic, have been found in earthenware from Vedic cultures as far back as 2500BCE. Hindu weddings today still include the ritual of mangala sutra, where the groom ties a string soaked in turmeric paste around the bride’s neck.

Ayurveda, the natural medicine system of India, prizes turmeric’s anti-inflammatory properties, bestowing more than 100 honorific names on the plant, referring to both spiritual derivations and practical applications. For example Jayanti means ‘vanquisher of diseases’ and matrimanika means ‘as beautiful as moonlight.’

Turmeric is seeing a resurgence in the west, surpassing its use as a traditional ingredient in Indian cooking. Curcumin, the active ingredient, has anti-inflammatory properties to rival ibuprofen, and, unlike ibuprofen, is not toxic to the body. Clinical studies are underway to evaluate turmeric’s anti-inflammatory, immune-boosting and anti-cancer properties.

We’ve been drinking a tea made of turmeric, lemon juice, black pepper and a little oil as our first intake of the day, for years now. Olive oil is fine, though we’ve recently upgraded this to Copaiba Oil, an amazing substance that warrants an article all of its own!

While it is readily available in root and powder form at local markets, we thought we’d go the extra mile and see what we could do with the turmeric growing at Sipapu. There is no better way to understand a plant, or its produce, than by going through the production process yourself.

Here’s how it went…

First the turmeric roots have to be dug up, remembering to leave some in the ground for propagation. 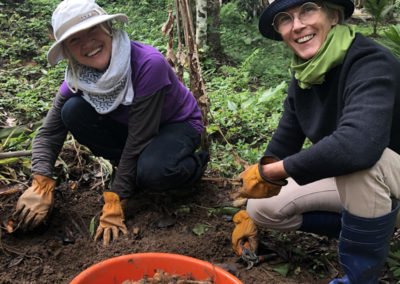 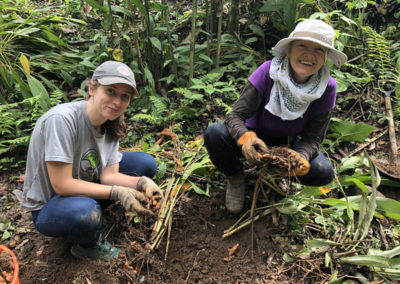 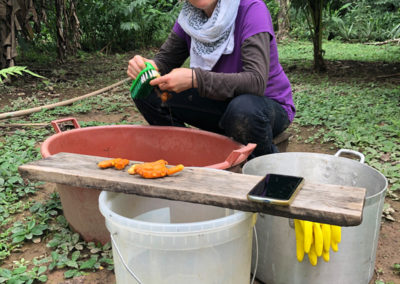 Next the roots need washing thoroughly. 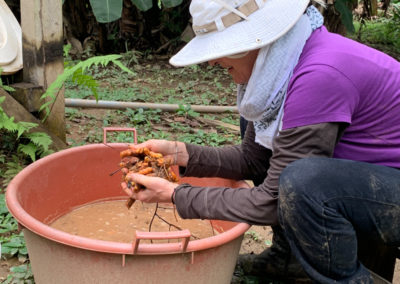 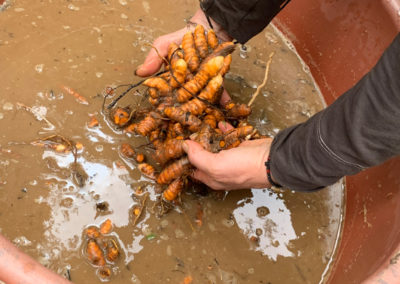 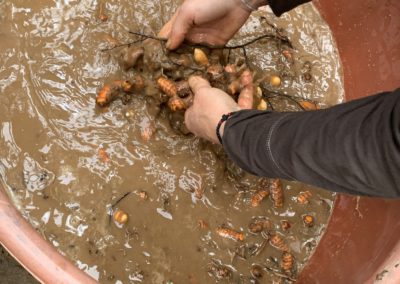 Now the roots are boiled in water until soft. 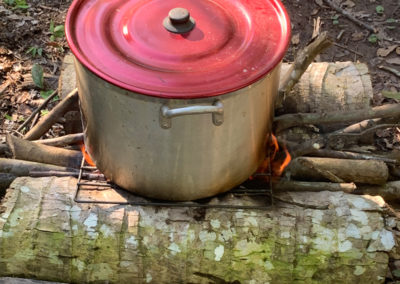 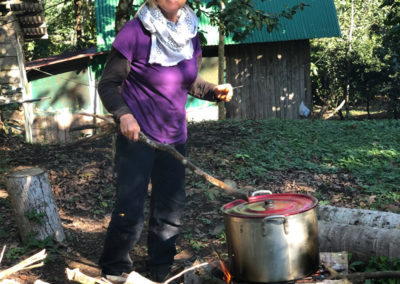 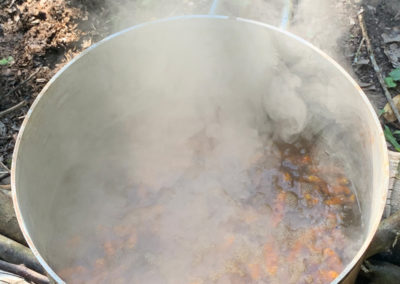 The roots are laid out in the sun to dry. 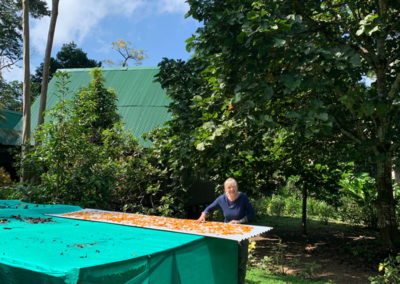 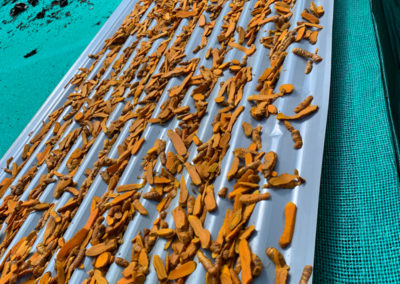 The cooked and dried roots are chopped into small pieces and ground into a fine powder. 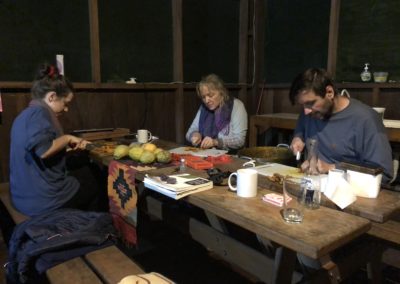 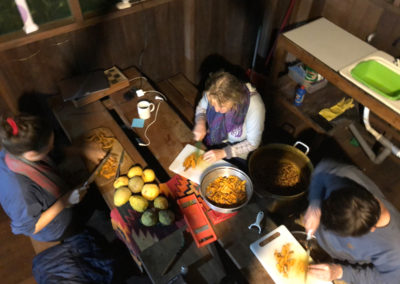 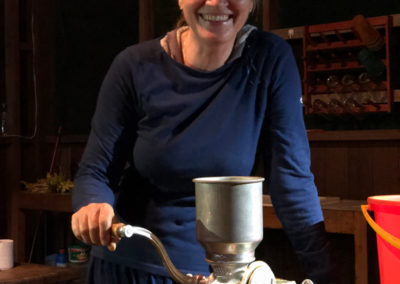 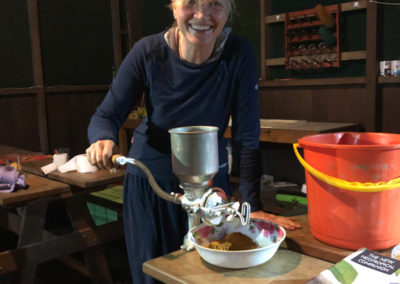 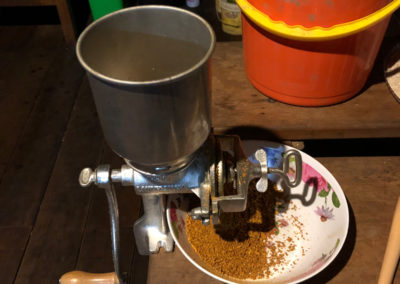 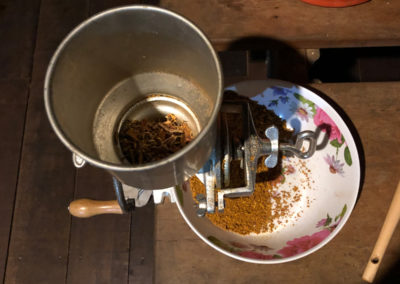 Finally, it’s important to celebrate and enjoy the fruits of all that labour! 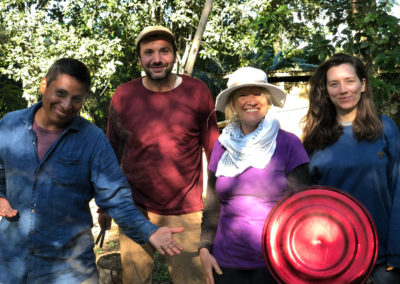 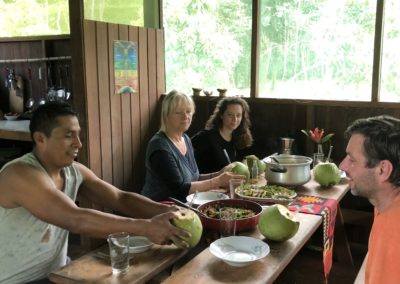 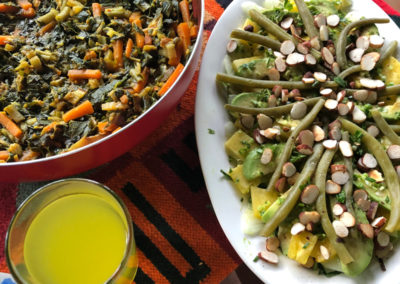 What did we learn?

The whole process took close to 2 days. No doubt with practice and experience it would get more efficient.

For us, the main learning from our experiment was what hard work it is to take a vegetable out of the ground and apply all of the steps in a production process that the end consumer takes for granted.

Whether its turmeric, coffee, cacao or rice, the staple products we depend upon to one degree or another have all been through various processes and lots of hard work before they’re ready for use.

And at the same time, the people doing that hard work are more often than not among the lowest paid workers in the world.

The price of a kilo of turmeric powder was a running theme at each stage of the process. It went from pretty cheap to pretty pricey by the end, inspiring all sorts of musings about economies, economies of scale, capitalism and disconnection from the Earth, and how just maybe everything’s a little upside down.

The development of the modern world – indeed “development” per se – can be seen as a drive to delegate, technologise or otherwise reduce or avoid the backbreaking labour it typically takes to harvest foodstuff.

The wheat industry has moved a long way from hand-collecting the seeds of what was originally a wild grass, to intelligent machines harvesting monocultural plantations.

Sure, the backbreaking work of picking and flaying and separating the wheat from the chaff is gone, but so is the connection to the wheat, to the end result which is seen as the product of technological and economic processes, rather than something that grows naurally in the soil.

Nature is also removed from her role as common social element, as the maternal force that binds groups of people together.

Many great writers – Robin Wall-Kimmerer, Barabara Mor and Monica Sjoo, Martin Prechtel to name a few – have written extensively and beautifully about the slippery road we travel once we turn away from the Earth.

Like we said earlier, we love to start the day with a little gold from the earth, by way of a hot lemon and turmeric tea. It’s really simple:

This is one the best alkalizing tonics we know. It’s a must if you also like a coffee in the morning (acidic).

Finally, we should say that, while the ancient and anecdotal evidence for turmeric’s anti-inflammatory qualities is plentiful (google it), modern clinical tests are undecided (google that too).

Help us build and sustain a happy and thriving community in one of the most challenging environments on the planet.