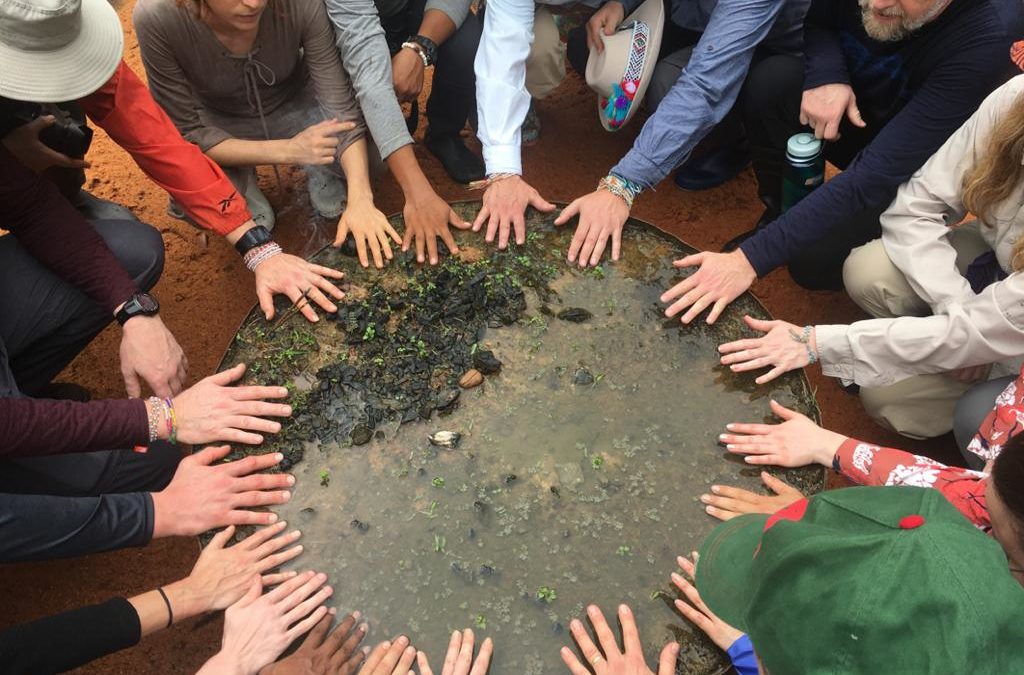 It’s not easy to stay positive about the state of the world’s bioregions, under the onslaught of depressing projections emerging from climate science labs and computer models.

As the world’s largest forest, the Amazon Rainforest plays a crucial role in sequestering CO2 from the atmosphere, and of generating oxygen.

Equivalent use of fossil fuels
at today’s rates

While these figures are not universally agreed upon – that depends on the endless detail of parameters included in computer models – it’s obvious that the Amazon plays a huge and crucial role in planetary carbon, nitrogen and water systems, to say nothing of providing habitats for 1/3 of ALL flora and fauna species.

20% of the forest has been destroyed since 1970, due to logging, mining, growing soya and raising cattle. Macro-modelling of the Amazon’s ecosystem services puts 35% destruction as the point of no return, beyond which the Amazon as a holistic, complex system, cannot recover, cannot regain equilibrium. After that, the pathway is one of steady decline, first to an increasingly arid savanna, then to a desert.

The latest predictions are that this 35% destruction line will be crossed as early as 2021.

Therefore, we must move and shake like never before.

Like never before both in the sense of NOT DOING the stuff that contributes to forest destruction, and in the sense of being mindful and taking positive action. Check where you might be invested, directly or indirectly, in operations that destroy the forest. That includes:

Which is pretty much all and everything our beloved civilisation is built on.

WHAT ARE WE DOING?

We’re operating at the ecological, economic, social and spiritual levels, top down and bottom up. Like they say about planting trees, the best time to do it was way back, the next best time is now.

We’ve worked to develop individual and communities for the last 5 years. Sipapu is the evolution of that work. It has one goal in mind: to sustain a regenerative human community right where it matters, in the heart of the Amazon.

We need your help.

Structured campaigns are on their way later this year to help fund Phase 1 of our Development Plan. But, given the alarming rate of change – it seems the scientists can barely keep up – we’re opening the doors to one-off donations right now. There are all kinds of costs involved in operating the project, from paying and taking care of our small staff, to buying provisions for onsite stays, from all the little things like knives and plates and torch batteries, to the big pieces like solar panels and irrigation ditches.

We’re not a charity, or even officially a not-for-profit. Right now we’re a UK-registered limited company with a bunch of shareholders who are 100% down with the Vision and Mission, attainment of which requires that all proceeds have to go directly into the operation and development of the project. No funds are quietly slipping away anywhere else.

So please, if you’re feeling moved to DO SOMETHING to help the GREATEST FOREST IN THE WORLD, you can JOIN THE ADVENTURE (for, despite all the doom and gloom, it most certainly is an adventure!) AND/OR SUPPORT US right now. Every bit of support helps.

Much love and deep gratitude in advance for your donations!